Venice Beach is one of the most well known and legendary beaches in Southern California.   Besides movies and TV shows filming at its location, occasionally a magazine snap shot shows a celebrity bicycling along the nearby beachside trail.  All walks of life stream back and forth on the now famous boardwalk and that alone is enough to keep you people watching for hours.

Situated just south of Malibu and Santa Monica, this eclectic beach town is known mostly for its circus like atmosphere along the 2 mile beachside promenade.   Of course there is much more to this area than the celebrated Venice Beach walkway.  Beautiful homes line the south side while the quiet and serene Venice Canals stay hidden just down the road.    For this story we are only featuring the boardwalk and Muscle Beach. 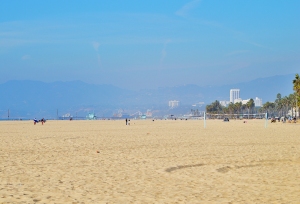 On this November day we successfully found parking at a lot right next to Muscle Beach. I have made many trips to Venice beach in the summer and ended up changing plans due to of lack of parking spaces.  At that time finding a spot was like finding gold.

This time luck was on our side, as we piled out of the car on our way to the world famous beach.   Many a cast and crew have filmed here for the day and one such cult classic was Xanadu featuring Olivia Newton John.  A wall mural was featured prominently in the movie in which Olivia’s character comes to life as she leaves the painting.   Although I never saw that particular mural, there were plenty others to add to the color of the area. 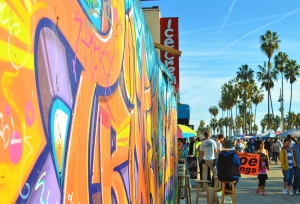 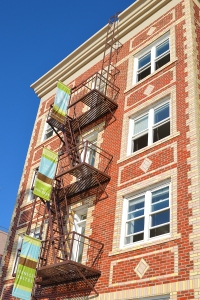 Even though it was 6 weeks into fall, the crowd was thick.  The weather was nice enough to wear shorts and the sun was beaming strong as if it believed it was summer.  I couldn’t imagine how busy it must be in July or August.  No wonder I could never find a parking spot the few times I visited.

As you step onto the side walk you are greeted by shops and stores selling everything you can imagine. Geared towards tourists, obviously there are tons of  t-shirts , novelty, and souvenir stores.  Strewn along the route are snack bars and restaurants with even an oxygen bar thrown in for good measure. 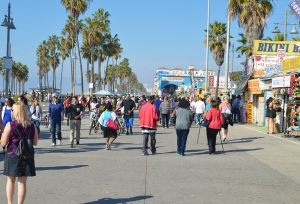 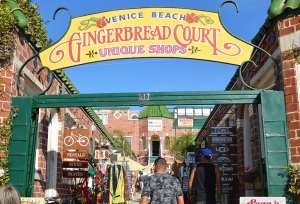 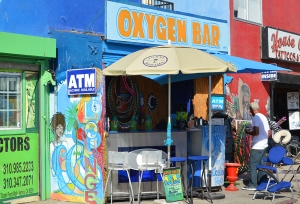 Scattered out along the sidewalk on the beach side are local artists selling their goods and local musicians performing alone or with a band.  I couldn’t believe how good the contemporary jazz band was that performed just outside the restaurant where we stopped for lunch.  Each player and especially the guitar player had the skill of any top musician now making it in the music business.    Along the way we stopped and listened to a piano player whose hands skillfully hit the keys to a point where you felt like you were at a concert at Carnegie Hall.  A slight exaggeration I know but it speaks to the quality of talent in these musicians. 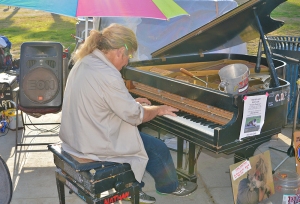 There were a few shall we say unusual people. One guy dressed up in some crazy costume with a flower pot hat was actually charging people to take a picture with him.  A lot of photo ops had signs that said they kindly take donations.   Half the time I was afraid to take a picture and the other half I was trying to take one while avoiding someone’s head in the shot.

Flying through the crowd was our first sighting of Harry Perry the now well known guitar playing, roller skating, and turban wearing man.  I know that sounds like a tongue twister but that is exactly what he is. I have seen him on TV a few times as he is a local icon and known for strumming his electric guitar while gliding through the vast sea of people.  He only slows down long enough for a photo op with tourists or to offer up his signature t-shirt, both at a cost.  To honor the man trying to make a buck, I only photographed his back side for posterity’s sake.

With such a cast of characters all in one place it was no wonder there was an attraction called Freakshow with sword swallowers, and other freakish acts.   The outside Barker promises that once you pass through the door you will be amazed at the wonders inside. Those wonders include two headed snakes or lizards, and various other animals with missing or added limbs.   Once he mentioned sword swallower I was done, not my cup of tea.   However, the place has been there for years, so there must be something of interest to bring in the crowds.

As the sidewalk continued on for more and more blocks, the sound of drumming hit our ears.  There were two separate areas where groups of people equipped with various percussion instruments expertly played a synchronized beat.  In one area a saxophone chimed in to add to the rhythm.

Located right on the beach and more towards the water is a skate park with tons of riders and an equal amount of onlookers.

Nestled between the various artists and musicians, street performers were at the ready to come to life as soon as a greenback was placed in their basket.  Food was abundant with snack bars and quaint curb side restaurants dotted along the way.  Public bathrooms were also readily available.

As we passed by Muscle Beach on our way back to the car there were a few chiseled men working out on various apparatuses. On some type of double bar they were performing cleverly worked out routines much to the pleasure of the surrounding crowd.   One muscle man announced that if we like what we see, they would kindly accept donations.    Even the muscle men were getting into the action that has become the norm for Venice Beach.  In their defense, what they were doing was quite impressive unlike the guy simply standing there in a funny hat asking for money. 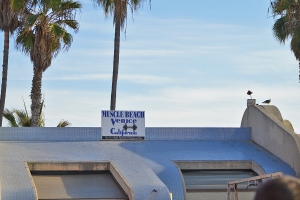 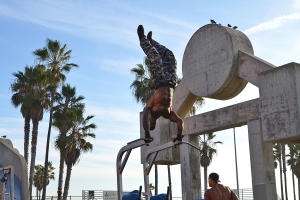 Venice Beach is a sidewalk circus with people overload.    It is a place you need to see at least once in your life.

Once seen, I can go back to my sleepy beach town and take pictures to my heart’s content without paying a dime.   With any luck there will only be a few heads in the way instead of a hundred.

Staycations California made all efforts to blur out the faces of pedestrians along the way to honor their privacy. No you are not seeing some new alien invasion.

One Reply to “Venice Beach”