This is Why we Pay the Big Bucks
As parts of the country were experiencing their first snow storms of the season, we were walking on the Oceanside Pier in shorts and t-shirts on a warm November day.   This was indeed why we pay the big bucks to live in California.

Walking the pier gives you a great perspective of the coast in both directions. However, what got our attention this day was the ocean and in particular how crystal clear it was. It was a lighter shade of blue unlike anything I have seen in this area. I have traveled to the Caribbean, Hawaii, Brazil, the Cayman Islands, Florida, etc. and nothing can compare to the clarity and turquoise tint of the water in those areas but, for California, this was the prettiest I have seen it in a long time. 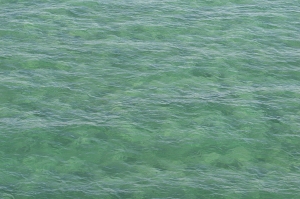 Because of the clarity, you could see the old pilings of a previous pier, something I have never seen or maybe not have noticed. Far below, we saw a couple of sting rays or sand sharks scurrying along the bottom.   An offshore breeze gently feathered the tips of the waves making the conditions perfect for surfing. However,   the waves were too small for the normal crowd of surfers who were probably home watching football. Except for a few brave souls, the 64 degree water was mostly empty of riders.

The pilings from a prior pier

The water was crystal clear

There is a lone pelican named Charlie that sits on the wood railing by the bait shop. He is the star of the pier with visitors jockeying to take photos and paying to feed him anchovies.   On this Sunday afternoon, he was joined by 3 new friends that were relaxing and enjoying the day, like we were. Charlie finally got up, stretched, and soon eyeballed an Abba Zaba candy bar that my friend just bought.   He started sneaking up behind her while she was looking the other way and only a warning from me kept him from claiming his prize. It probably wasn’t good for him anyway.   The hefty bird would soon be getting left-over bait and anchovies. Plus there were tons of little fish in the water that we could see clearly, way better than an Abba Zaba. 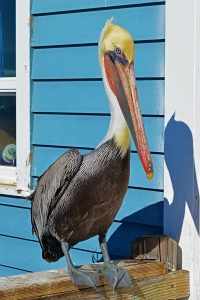 Later, as the sun disappeared on the horizon, the vibrant orange sky stayed bright for at least a half an hour more. Catalina Island could be seen to the north and a weird cloud illusion gave it the look of a plateau in Utah.

All of this eye candy was another reason we pay to live in beautiful California.

Unfortunately, in winter the temperatures drop quite substantially in the evening. We babies in California don’t like to be cold, well at least I don’t.

Later on, as I sit down and write the rent and utility bills, I will remember that warm Sunday in November and be grateful that I live here. The digits I am writing on the checks won’t seem as bad knowing that on any given day I can stroll the pier eating Abba Zabas, feed friendly pelicans, watch an amazing sunset, and only ever have to wear a sweatshirt to stay warm.

Well, actually with El Nino on its way, I may have to pull out the parka…but only for a little while.