By Land and By Sea

Sometimes it is fun to play tourist even if it is only 30 minutes from where you live.  I had heard about the Seal Tour in San Diego Harbor many times and always wanted to try it.

So Staycationer JoJo  put on her reading glasses and searched her trusty Groupon for a few tickets.   Done…booked…ready to go!

On a typical gray cloudy day in Southern California we headed down to Sea Port Village to give it a try. Luckily the sun popped out right before boarding so we knew the ride would be a little less nippy

The SEAL  is an amphibious vehicle  that can drive on the street as well as the water. SEAL is an acronym for “SEa And Land.”  It holds about 40 people comfortably and looks like a huge safari truck with a boat front.

Once you board the vehicle,  it takes you through the streets on your way to a boat ramp on  Shelter Island.  As mentioned, the street ride was a little breezy as the vehicle was wide open and we were going at least 45 miles an hour.  So take a jacket or a sweatshirt unless it is summer.

Riding along the harbor on the SEAL

The Captain drives the vehicle while the first mate acts as a guide/narrator for the trip. Equipped with a microphone, the guide gives you informative tidbits about the city, the embarcadero, various attractions, the bay, etc.   As you pass by the embarcadero you will see the sailing ship “The Star of India”, the “Midway” air craft carrier, other naval ships, a submarine, and of course the beautiful harbor.  You will pass by the Coast Guards Naval Station and the San Diego Airport on your way to the water portion of the tour. 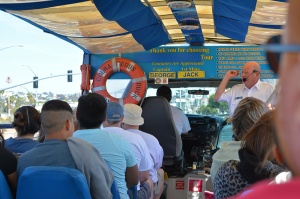 Once we reached Shelter Island we headed to the boat ramp and waited our turn to enter the water.

It was an easy transition from the street to the water and other than slowing down, you wouldn’t notice the difference. Actually being on the water was way smoother until  the speed boats caused a wake that rocked the boat a little.

Slowly we moved around the bay and soon the clouds parted to display the beautiful San Diego Harbor in all its glory.