Last year we wrote a story entitled “Five and a Half Days” in which we visited San Francisco, Sausalito, Napa, Fairfield, Suisun Bay, Benicia, The Delta, plus visited the Jelly Belly Factory, fished Grizzly Island, and so much more yet only in five and a half days. We never felt rushed and spent hours just leisurely kicking back or fishing along the rain saturated banks of the delta.

This time we are doing a mini version called, Three and a Half Days. On this trip, we visited Cayucos, Avila Beach, Pismo Beach, Grover Beach, Oceano, Summerland, The Dutch town of Solvang, Carpenteria, Downtown Ventura, and Santa Barbara. We visited a butterfly grove, an ostrich farm, we saw six piers plus drove on two, we fished at night under a full moon, we saw otter and seals, and made it back home in time to watch the 6:00 news. As with the other trip, we never felt rushed.

On our way to Santa Barbara, we decided to do a quick excursion over to the Dutch village of Solvang. 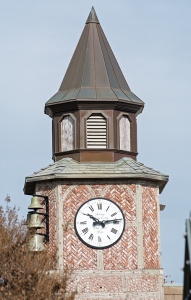 I say Dutch because all of the architecture in the town is Danish. Way back when, it used to be just one main street, however, it has turned into several streets filled with shops, restaurants, bakeries, etc.

Even on this crowded weekend day, it didn’t seem bad because over those several streets there are, quite a few nooks, crannies, courtyards, and little alcoves filled with various retail or food establishments. You can easily stroll through the crowds while spending hours shopping, eating ,or just looking around. 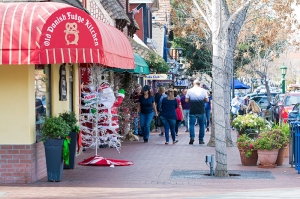 Besides the delicious bakeries, there are wine tasting rooms, festivals, parks, interesting novelty shops, and more.

I love the Danish architecture which adorns most of the structures, even the gas stations got in on the spirit. 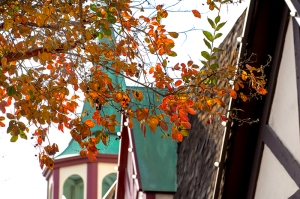 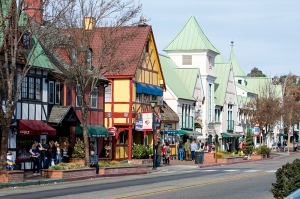 It is a great place to visit for the day even if just to enjoy the scenery or see an Ostrich or two… yes, I said Ostrich.

OstrichLand
Just a short drive out of the main town of Solvang we saw a group of animals running though a field and on closer inspection, we saw that they were ostriches! I have seen them hanging out in the fields before on my many trips to Solvang but never felt inclined to stop.

This time, with plenty of time on our hands, we decided to pull over and check out this new place that they now call OstrichLand. 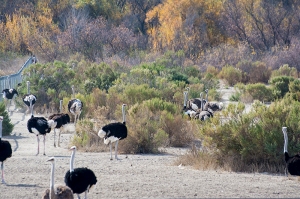 Basically it is an Ostrich and Emu farm that allows you to get up close and personal with the gigantic birds. For $5.00, you get entrance, plus a bowl of food to feed them.

I choose to bypass the feeding part and just take photos of these extremely interesting creatures. A few of them, let’s just say are not as cute as they are portrayed in cartoons or in cuddly stuffed animals.

Just when you thought that they couldn’t reach the food from the bowl dangling over the fence, their necks would stretch out like a telescopic pointer, rising and rising until they were enthusiastically pecking at the food. Don’t get the fingers to close though as staycationer JoJo found out, they can peck at your hands.

One of the cute ones

This is just a bazaar looking bird with two large weird looking toes, a long neck, a big body, plus it can’t fly, yet can run at least 43 miles per hour. Surprisingly, the kids around us were both in awe and scared of them at the same time.

Once in awhile, you would see a bowl go flying in the air followed by a tiny screech or scream.

Anyway, it is worth a stop if you are in the area.

Santa Barbara
After an overload of eye candy from all of the small and charming California towns we visited prior, it is hard to come up with words as we visited the best known of the bunch, Santa Barbara. With a population over 90,000 it doesn’t qualify as a sleepy little village, yet it sure felt like it in my opinion. Even with that many residents and all of the tourists, the traffic was never bad and you could get around quite easily. I loved it there.

This time, we stayed at a much nicer hotel that was directly on a main street that faced the harbor. After all, it was New Years Eve and the Staycations crew wanted to bring in 2018 in style.

The room was nice but way smaller than the place in Cayucos. Flopping myself on one of the beds and feeling the pure comfort, it was evident that this is what you get when you pay a little extra.

We don’t get to see much of the rooms anyway, as we are always on the go and this was no exception as we were already out the door to explore the city. With check-in at 3:00 pm and sunset at 5:00 pm, there was no time to spare.

It was time to check out the pier which was only a few blocks from where we were staying.  Stearns Wharf as they call it, allows you drive and park on it just like the wharf at Avila Beach. The slight difference is you have to pay here, however, the first two hours are free and it isn’t that much if you surpass the time limit.

The pier was full of life as it holds three restaurants, a bait and tackle shop, souvenir stores, candy, ice cream, clothing, wine tasting, shells, and even a palm reader on top of this amazing structure. Obviously, it was way larger than Hartford Pier in Avila Beach. 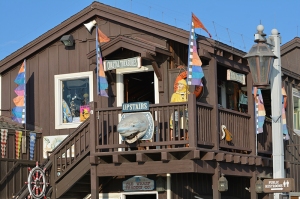 \
One of the cute shops on top of the pier

On a little offshoot section of the pier sits a museum that focuses on marine life and conservation of the Santa Barbara Channel. The “Santa Barbara Museum of Natural History Sea Center” looked like a pretty cool place judging by a giant whale sculpture that was hung in its lobby. Also, it took me almost the whole story just to write its full name, I should have stuck with a simple” Marine Museum.”

There was plenty of parking on the pier although I am sure in the summer and weekends, it is packed. This day was a weekend and yes it was packed, however, we were lucky and found a spot close to the end of the pier.

I loved this place because at the very tip of the pier is a wide open space for fishing, and by open, I mean open! There are no guard rails, there is just an unprotected edge that has nothing keeping you from falling into the ocean.

They placed several wooden logs around for seating areas that can protect you from going over, but other than that, you are on your own. A young boy was bringing in a large fish and everyone was bent over while looking over the edge, all it would take is a slight bump to send someone flying from the pier.

I also looked to see what the kid was bringing in, however, I hung on to a light post, I didn’t want to join the fish.

This is something unique and what I liked about the pier.  As I sat on one of the logs, I realized that I was far out from the shore with an unobstructed view of the sea! It was awesome. 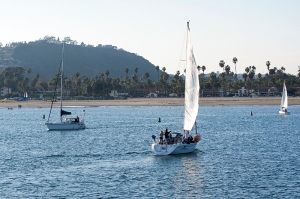 Just a few feet away from me, I saw a container hanging on a pole with a life preserver inside and I noticed a ladder was nearby. I was amused thinking obviously at some point someone had to have fallen over, necessitating the need for these items. Luckily, this wharf is not as high from the water surface as some of the other piers in California, so I don’t think you would hurt yourself… other than your pride and dignity.

We made a point to check out the shops but yet again we missed them as they were closing for the day. The restaurants were still booming and there were still plenty of people walking around.

On the north side of the pier, you can see the harbor and from the comfort of one of the logs, you can watch the boats as they make their way back in for the day.

Then there are those mountains and hills which seem to go on forever. The hills are full of beautiful homes that have sweeping views of the beautiful  Pacific Ocean. 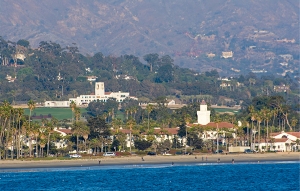 It can’t be a perfect California beach town without palm trees and Santa Barbara has plenty. The streets were lined with them as the palm fronds swayed easily against a mild ocean breeze.

There was only a limited amount of daylight left so we exited the pier and headed north towards the main beach. There was a large parking lot with plenty of spots and again at a reasonable cost.

From high on the pier, I noticed patches of rocks on the sand so I was anxious to spend a few minutes hunting for sea glass. I did manage to find some hefty pieces but again less than prime quality. It was all a moot point as I forgot all of my findings in the hotel at the end of our trip. Some sea glass hunter I am!! 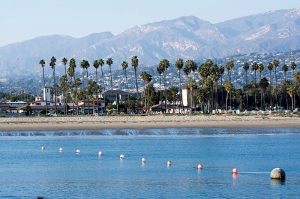 The sun had now disappeared from sight and was replaced by a dazzling full moon. It hung over the horizon as if to welcome in the New Year.

Dinner time was approaching, so now on to State Street to find a place to eat. State Street is the happening place and seemed to go on for miles. From trendy restaurants, night clubs, bars, shops, there is something for everyone. There are little mini malls, arcades, galleries, theaters and much more.

We choose an outdoor over-priced Mexican food establishment and enjoyed every expensive bite.

Since the wharf was still open, we headed back with fishing gear in hand to try our luck. It was an amazing evening with that bright moon and the beautiful coastline now illuminated in lights.

I stayed even further from the edge of the pier because the now dark Pacific Ocean didn’t look too inviting.

The restaurants were still packed and the smell of sea food permeated in the air. Just like night fishing on Hartford pier, there were not too many people with lines in the water.

We caught two tiny octopuses, although in reality they caught us, since they were only hooked to the bait, not on the hook. The ugly eight legged creatures slithered on the pier just long enough to creep me out before they were released back in the water.

With not too many fish bites, we grew tired and decided to go back and take a swim at the heated hotel pool.

As midnight approached, I could barely keep my eyes open but just had to be outside on New Year’s Eve.

With a mellow stroll through the harbor, it was evident that this was NOT the happening place, it was dead quiet. As midnight hit, you could hear the cheers coming from State Street and a few parties nearby. I let out one meek little hoot and with that… 2017 ended and 2018 began.

At least we mustered enough energy to join in with the celebration, although from a distance. That comfy bed was calling my name now and it was time to start the year with a restful sleep.

In the morning we will be heading south toward home but not before stopping in Summerland, Carpenteria, and downtown Ventura.