Wild flower season is almost here in California.  Here is a story about a quick jaunt through the desert, This was after the blown, this year, we will head out there again to see the flowers!!! 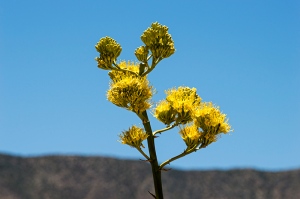 Off the Beaten Path, Way Off!
On this extremely hot day in late May, there was a long road ahead with no cars in sight and none on the horizon.  Everywhere you looked you saw sandy brown hills and cactus against a vibrant blue sky.  The hundreds of cactus were a photographers dream about a month ago when they were blooming with colorful wildflowers. From some of the photos I have seen on the internet, it must have been quite something to see.

But this time the air was sizzling at 105 degrees, the flowers were gone, and the long stretch of road was empty.

Why was this road built if there was nothing out here?

Out in the Middle of Nowhere
We were out in the middle of nowhere and I was glad it was daylight. I gave a brief thought of how awful it would be to break down on this lonely road, however, I quickly kicked that thought out of my head.  I also thought how hard this must have been in the stagecoach days, traveling through this harsh environment with wooden wheels and no air conditioning! 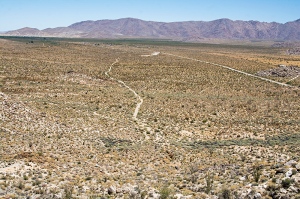 Once in a while you pass by an RV resort and again I was wondering why anyone would camp way out here.  The resort better have a big pool is all I can say.

I found out later that this area does have many camping options including, free primitive spots, private campgrounds, and resorts.  It must be a great get away from colder regions around the state and a place you can come to de-stress far away from the crowds and traffic.

It finally hit me that we were in the interior of California with what seemed like a population of zero.  This is the same state that has 23 million people living in the southern part alone.  It made me appreciate how much more land California has and how much it has to offer.

At least where I live, I can drive two hours in any direction and either be at the beach, in the mountains, or at the desert.  In two hours time I could experience a temperature drop of at least 40 degrees Fahrenheit depending on the time of year.

In this case, I was in the desert, the Anza Borrego area to be exact.  I was driving at least a half an hour on some unknown road that had me lost and wondering where I was!  As mentioned above, most of the time I saw no cars, no people, and no buildings.

Cactus as far as you can see

A Mirage?
Finally I saw a small area in the distance that I was hoping would have a gas station or a store. It had the latter.  A small store to be exact, but the man behind the cash register was familiar with the area and gave us the bad news that we were 20 miles off track from our destination, the Salton Sea.  Not only did we have to back track but we still had an hour to go to the Salton Sea.

No need to get upset, it was time to enjoy the peace and solitude of this sun drenched landscape that was far removed from civilization.  On research later, I found out that this WAS a great place to view the blooming wildflowers although less crowded than some of the more popular sites.  If we have another rainy season, I am definitely coming back with camera in hand.

Fun and Not so Fun Things in the Desert
The desert always intrigues me although I am a beach girl and always will be.  I wonder what people do out in the middle of nowhere. I know dune buggies and any kind of sand sport is popular and the stars at night are amazing but, what about the remoteness and the isolation?

I pulled over to take a few shots of the desert and heard the subtle yet alarming sound of a rattle snake in the distance.  I had heard this sound before.  Maybe it was closer than I thought since it WAS loud enough to hear, plus why did it feel the need to rattle in the first place? I got back in the car.

Some of my least favorite things are in the desert which includes the dreaded rattlesnake plus, tarantulas, and scorpions.  On the fun side, I have spent some great times on dune buggies, three wheelers, quads, motorcycles, and there is nothing like ending the day by a camp fire and star gazing at night.  The darkness of the desert makes the stars shine bright  as if you could reach out and touch them. 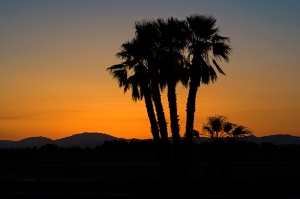 The day ends in the desert. Some say desert sunsets are the best.

We finally made it back to the correct road that would lead us to our destination.  I am glad I got lost, mainly because it gave me an even more appreciation of California and how it has so many different climates and landscapes.  It has lakes, rivers, creeks, mountains, deserts, beaches, oceans, islands, estuaries, canyons, waterfalls, redwoods, lagoons, and so much more!

Making it back home to the coast later in the evening, the display on my car thermometer read 65 degrees outside.  Wow, it truly was a 40 degree swing!

There is much to do in the desert and I am sure we will be doing some stories in the future but in the meantime, I’ll stay cool on the coast and wait to visit again in the fall when the temperatures drop or in the spring when the cactus are blooming.