The Thanksgiving holiday weekend was quickly approaching and we had no plans in mind for the four days off from work.

The fires in central California were keeping us from planning ahead because they were in the areas we wanted to visit.  Then as time drew closer, the weather forecast called for pouring down rain throughout Southern California.   This was good for the fires, not so great for vacation plans.

What to do?  What to do?  Because of the rain, it was decided that an indoor venue would be best.  Where could we go that was interesting and we could do things inside?

An indoor tour of the Queen Mary sounded like a good plan for at least one day, so we perused the internet for information.  The next thing I know, a room was booked for a two night stay in one of the staterooms of this historical ocean liner.

Before I talk about how our stay went, it is important to know the history behind this amazing ship.

The History:
The RMS Queen Mary is a retired British passenger liner that now has its home docked in Long Beach harbor.

Built by Cunard Line, this impressive vessel started its maiden voyage on May 27,, 1936, from Southhampton, England.

It was glamorous at its time with five dining areas, lounges, two cocktail bars, swimming pools, a grand ballroom, a squash court, and a doctor’s office.

It had class and style and even as you walk its floors today, you can tell that this interior was once the epitome of elegance.

While watching one of the 4D films in the theater about its history, we were amazed that at one time it was actually used in war time to ferry soldiers from port to port.  Photos in the movie show over 16,000 men aboard with a good part of them lounging on the deck.

There was actual footage of the inaugural voyage and christening, then subsequently the celebrated launching.    This massive bucket of metal amazingly slipped into the water without any trouble and was soon on its way to many trans-Atlantic voyages.  On screen as it splashed into the waterway, the seat ahead of us squirted us with water, all a part of the 4D experience.

After hundreds of voyages, the Queen Mary ended her illustrious career by making her final journey to the port at Long Beach, California.  In 1967 she officially became a hotel and a tourist attraction.

Looking at the ship from the other side of the harbor

The Quirkiness of the Queen Mary:
To access the ship, you walk over a gangway to the check-in desk. Your first sight is an old piano next to a lounge featuring a couple of large port holes. There you can look out over the Long Beach harbor.

We were told that our room had no portholes and was situated in the inner part of the boat. We knew from seeing the staterooms online that this would be a very small space.  We also were told that we could pay a nominal fee to get portholes but there would be no heat.   It was a cold weekend and picturing me freezing while trying to sleep, didn’t hold up much appeal.  So warm it would be.  I left the negotiations to look out the large portholes onto the harbor and resigned myself that I will be spending a few days in a little cubby hole.

As I walked down the hallways there were small sub halls leading to a room on one side and one on the other. In some cases there were four doors in one section.  I thought, “Oh, this is going to be small.”

When we reached our room, there was only one door,  so this looked promising.  Sure enough it opened into a long hall that led in to a space with two single beds and surprise, surprise, there were portholes!

They were actually very large portholes and there were two of them!!  The accommodations were pretty spacious and the bathroom was a normal size, I was very, very happy.

The lady at the desk must have given us an upgrade as she saw we were worried about the heat.  As it turned out, this room had plenty of heat and there begins the quirkiness part of staying on the Queen Mary.

There were two open ‘spout’ like apparatuses on the wall where one side said colder and the other warmer. We fiddled with them until we saw the actual thermostat on the wall.  Those must have been just for show although we never knew for sure.

There were also faucet handles near the shower that said hot salt, hot fresh, cold salt, or cold fresh.  We knew these didn’t work but they gave us pause to wonder why anyone would want salt water for a shower, especially cold.    Oh, well that’s what you get on a ship built in the 1930’s. 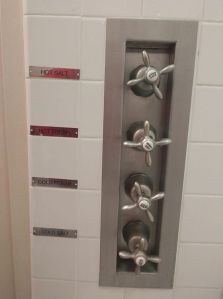 The toilet flusher was a handle that you pushed in, unlike anything I have ever seen, but it DID work. 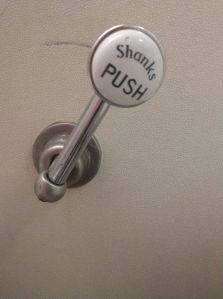 The funniest part was the bathtub.  The shape of it made it very hard to balance yourself while taking a shower.   It wasn’t flat and was angled like a really deep scoop so you were very unstable standing straight up facing the shower head.   Luckily there was a hand rail to hold on to which I used the whole duration of the shower.   I thought, if I am having a hard time and the ship isn’t moving, how did they shower during rough seas?  Maybe baths were the order of the day back then?

I laughed the whole time I was in there because I was literally holding on for dear life.  This was a funny experience making me wonder what it was like actually taking a trip across the ocean back in those days.

The stateroom had two small twin beds that weren’t comfortable nor uncomfortable.  Luckily, they catered to us in the year 2019, as the TV was a sizeable flat screen. 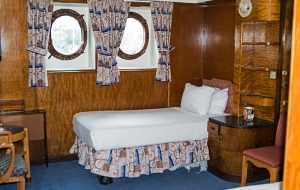 Another funny thing about the interior and is something they do warn you about.  It is how thin the walls are in the passenger areas.    I heard someone talking and laughing, so I thought maybe a walkway was just outside of the portholes.   When I looked out, it was just the side of the boat, nowhere for anyone to walk.  It turned out to be the people in the next room that you could hear almost as plain as day.   Although laughter and indiscernible conversations went on just feet away, we were happy they stopped around 11:00pm.

Overall the stateroom is exactly what you would expect, with wood panels, décor, and ambiance of that era.

You have to embrace the history and go with the flow.   Imagine what it was like back then, when they were sailing across the Atlantic Ocean.   This hotel is not like any you have ever stayed; take it for what it is.

One final note, in winter the ship is cold.  In certain parts and in particular where they leave the doors open, it can be downright chilly. So bring plenty of warm wear.