You can find a whale watching tour at almost every harbor in Southern California. Find out what whales are migrating and when.
The prime time is January through April when the Gray Whale migrates 6,000 miles south from the Bering Strait to mate and calve in the warm lagoons of Mexico. The Mamas return north with their young and the Moms alone can be as long as 52 feet.
The California coastline also has witnessed seasonal migrations of blue whales and humpback whales as well as a rare sighting of an Orcas (Killer Whale). The humpback and blue whale migrate during the summer.
The first part of the year in Southern California is known for whale watching season. So we took the opportunity and jumped on a boat leaving from Oceanside, California.
Leaving the calm of the harbor aboard the Oceanside 95, there is plenty of opportunity to view other wildlife such as seals and pelicans .  We even saw a rare pod of dolphins in the harbor once. 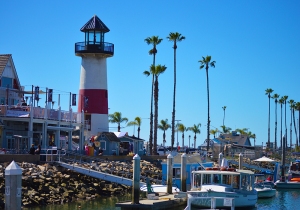