Birds are Cool
I heard a noise outside my window the other day that sounded like a puppy crying, so I ran to check on my dog to see if he was okay.  I found him sprawled out on the couch sound asleep and happy as can be.  Puzzled, I then went outside to investigate and soon heard the same noise except this time it was even louder. Since I live by a lot of coyotes I thought maybe a new pup was in distress.  As I stood there listening, I realized the noise was not coming from ground level, it was coming from above.  There, high in the tree was a bird with his mouth wide open making that painful sound.    It wasn’t like the melancholy wail of a Mourning Dove, it actually sounded like a puppy weeping.

The crying bird, wailing away.

I pulled out my camera and proceeded to take shots of this interesting bird and it made me think, “birds are cool!”

I remembered when I went to the Living Discovery Center with all of its rescued animals and I found that the birds intrigued me the most.   At this center, they had many different types of birds including the majestic eagle, scary looking vultures, owls, falcons, and dozens more.

Blind in one eye

You will see Eagles, Owls, and Falcons at the center.

As it turns out, California has recorded 660 different species of birds which is more than any other state in the U.S.   California is home to deserts, marshes, redwood forests, coastal areas, beaches, rivers, and lakes which make the versatile terrain home to many different types of birds.

So it is of no wonder that bird watching, or birding as they call it, is a popular activity in California as well as across the U.S.   There are a multitude of websites dedicated to the birding enthusiast.

A Big Year
I remembered a movie called “A Big Year” where birders have an informal competition on who can spot the most species of birds in a year.   The American Birding Association claims that 783 species is the record so far in the territory of the U.S. and Canada. The world record is set at 6,833.

Can you imagine having that much time to be able to travel around and look for birds?   I can visualize the scenery and the sights that you would experience not to mention the chance to see rare birds or some you don’t see every day.  Sadly, I have to work and traipsing across the U.S. will have to wait.

However, I’ve  heard of stories where people set out for a big year and have actually worked a job during the process.  I read about one lady who worked 20 hours a week and still managed to see over 500 different birds. I guess it is all about knowing where to go and dedication.

I know this may sound boring to some people but I think it might be kind of fun. I don’t know anything about birds but would learn if I can get someone to pay my way for a year.  Any takers?

The many birds in California

On some of these websites there are reports and sightings of rare birds that send enthusiasts from near and far to that locale just for glimpse or a photo.  Or there are sightings of large congregations of birds all in one place.

Many birds can be seen at Lake Cuyamaca

It is like any other hobby. Some people collect items, birders collect sightings, photos, and mostly experiences.  It is like a wild treasure hunt.

A Bird is a Bird
Out of all of the six basic animal groups, birds are one of the most colorful.  Look at parrots as an example and all the wonderful colors of their feathers  Birds range in size from the tiny Hummingbird that can hover in mid-air by virtue of their rapid wing-flapping, to the Wandering Albatross that has a wing span taller than humans at 8 to 11 feet long. 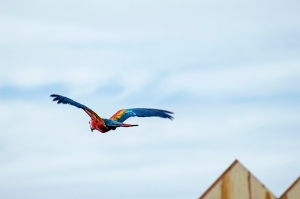 A Pelican has a pretty wide wing span too.

There are two birds that are only found in California, the Yellow-billed Magpie and Island Scrub-Jay. Plus there are many birds barring the name of our state, including the California Quail, California Condor, California Gnatcatcher, California Thrasher, and California Towhee.

I don’t know much about the different types and species of birds; living on the coast.  I’d know a seagull and a pelican all day long.  Just don’t ask me what a Yellow-billed Magpie looks like, in fact, I barely had enough patience to research the one that was crying up in the tree. 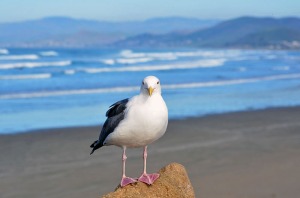 Familiar sights in coastal California, the Seagull and the Pelican

So I probably won’t be doing a “big year” after all,  but will still be on the lookout for unique and unusual birds.   I have seen maybe 25 different species this year and photographed only about 17,  so only 759 more to go to beat the record!!

This is cheating a little since I did see these two at Sea World, but it was in California.

Birds kicking back at Canyon Lake

Beauty and the beast. A swan next to an old abandoned boat on the Noyo River.

As mentioned, California is abundant in a variety of birds so if you are interested in bird watching, here are a couple of fun sites, 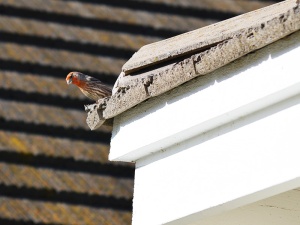 Mama bird collects for her nest while Papa guards.

A real Dove sits on her eggs in a basket with a fake bird in the background.