It seems like there is an imaginary line between Driscoll’s Wharf and its neighbor, Point Loma Marina. Both are part of what San Diego calls the America’s Cup Harbor, but that is where the similarity ends.

Point Loma Marina is a new addition to San Diego with its metropolitan design and homey feel.  Cozily nestled below the foothills of Point Loma, it is only minutes to the main bay and features a few shops, restaurants, a fully-stocked tackle store, plus boat rentals are nearby.  There is a small grassy area between the buildings for you to relax and enjoy the atmosphere.

Point Loma Marina in the distance

I wrote a blog on the Point Loma Marina a few years back but didn’t walk as far as Driscoll’s Wharf.  Being on a parking time limit, we didn’t get a chance to explore as far as we would have liked.  This time we strolled along the sidewalk all the way to the end which is nearer to the main San Diego Bay.

An Imaginary Line
You could visually see where one area ends and where the other begins by the buildings alone.   As you enter Driscoll’s wharf, you leave behind fresh, award winning, and modern architecture, only to arrive at old faded buildings that looked abandoned.  Paint was chipping off and all the windows were closed. 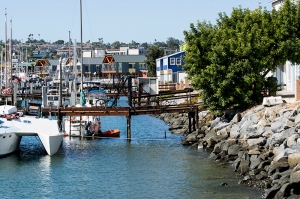 Buildings in need of a paint job