Our home port was Half Moon Bay for the four day holiday weekend, however, our plan was to explore the nearby coastline north on one day and south on the other.

Half Moon Bay and other cities north were visited in part one of a three part story. So for part two of our trip and on the second day, we are headed down the coast towards Santa Cruz. We hadn’t considered going all the way to Santa Cruz even though it was only about an hour away. However, the drive was mellow with virtually no traffic, so we continued all the way to this larger coastal city.

During the scenic hour long drive on the iconic Highway 1, we stopped at many beaches and state parks along the way. All we knew at the beginning was that we wanted to stop at the small town of Davenport on a search for some sea glass. The rest of the trip would be open to wherever the wind blew us. At our hotel, the elevator door had a huge photo and map of the Pigeon Point Lighthouse taken against a gorgeous orange sunset, so now this was on the list of places to see too. 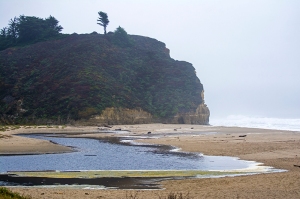 Davenport:
I have heard people call this part of California; “the Slow Coast” because it is filled with small sleepy towns and Davenport is certainly one of those.

I wanted to visit Davenport Beach, because I had heard it is known for its sea glass hunting. There are videos on the internet of people using long scoops to grab the incoming sea glass before it gets pulled back out by the receding wave. With the water so cold up in Northern California, the hunters wear wetsuits and brave the incoming waves that can easily drag you out to sea.  I wanted to see this in action although my idea of sea glass hunting isn’t quite that extreme.

We did pull aside to visit a turn off just short of the actual town and combed the sand for sea glass.
Staying higher up on the beach and avoiding any incoming waves, we still managed to find a few pieces. I didn’t see anyone else hunting but it could have been the tide situation or this wasn’t the place I saw on the Youtube clips.

We drove a little further and came up the actual town of Davenport with its population of under 500 and one of those towns where if you blink, you just might miss it. There is another beach right in front of this area that is probably where I have seen the videos of the extreme sea glass hunters. We viewed the shoreline from the bluffs but since we had already tried our luck just a few minutes earlier, we decided not to take the trek down the hill. 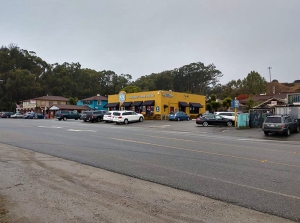 The small town of Davenport on old Highway 1.