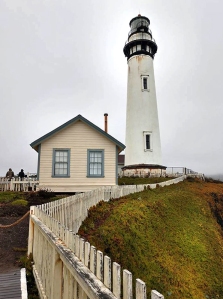 Our home port was Half Moon Bay for the four day holiday weekend, however, our plan was to explore the nearby coastline north on one day and south on the other.

Half Moon Bay and other cities north were visited in part one of a three part story. So for part two of our trip and on the second day, we are headed down the coast towards Santa Cruz. We hadn’t considered going all the way to Santa Cruz even though it was only about an hour away. However, the drive was mellow with virtually no traffic, so we continued all the way to this larger coastal city.

During the scenic hour long drive on the iconic Highway 1, we stopped at many beaches and state parks along the way. All we knew at the beginning was that we wanted to stop at the small town of Davenport on a search for some sea glass. The rest of the trip would be open to wherever the wind blew us. At our hotel, the elevator door had a huge photo and map of the Pigeon Point Lighthouse taken against a gorgeous orange sunset, so now this was on the list of places to see too.

Davenport:
I have heard people call this part of California; “the Slow Coast” because it is filled with small sleepy towns and Davenport is certainly one of those.

I wanted to visit Davenport Beach, because I had heard it is known for its sea glass hunting. There are videos on the internet of people using long scoops to grab the incoming sea glass before it gets pulled back out by the receding wave. With the water so cold up in Northern California, the hunters wear wetsuits and brave the incoming waves that can easily drag you out to sea.  I wanted to see this in action although my idea of sea glass hunting isn’t quite that extreme.

We did pull aside to visit a turn off just short of the actual town and combed the sand for sea glass.
Staying higher up on the beach and avoiding any incoming waves, we still managed to find a few pieces. I didn’t see anyone else hunting but it could have been the tide situation or this wasn’t the place I saw on the Youtube clips.

We drove a little further and came up the actual town of Davenport with its population of under 500 and one of those towns where if you blink, you just might miss it. There is another beach right in front of this area that is probably where I have seen the videos of the extreme sea glass hunters. We viewed the shoreline from the bluffs but since we had already tried our luck just a few minutes earlier, we decided not to take the trek down the hill.

The small town of Davenport on old Highway 1.

Across the highway, sits a few restaurants, inns, bakeries, art galleries, and shops. We didn’t investigate because we were on a mission but it is yet another one of the quaint and charming towns you see in central or northern California.

I did skip ahead a little on this story because on our way to Santa Cruz and before Davenport, we had stopped at quite a few beaches and one rustic lighthouse. They were considered state parks but we never had to pay as they were closed for the day. It was pouring down rain but every time we pulled over, it subsided long enough for us to get out and put our feet, (make that shoes) in the sand.

The weather wasn’t optimum for picture taking, so hopefully with what I snapped, you can get the idea on how beautiful it is up here on the “Slow Coast.” The phone camera came in handy a few times in between the raindrops.

The beaches had tons of drift wood and the sand was beautiful even on this gray day. Through the raindrops you could see birds of every type hanging by a river entrance or sitting on a piece of broken tree. A lot of times there were rock formations out at sea and jagged bluffs adorned the shore.

Pigeon Point Lighthouse:
When we arrived at the Pigeon Point Lighthouse, the weather was yet again our friend and the rain held off long enough for us to walk around. I was resigned to the fact that I wouldn’t be getting a spectacular sunset photo as was featured on our elevator door, however, at least I could get some shots for posterity’s sake.

The 115-foot Pigeon Point Lighthouse is perched on a cliff and is one of the tallest lighthouses in North America. The lighthouse is old and tattered but is looks like it is receiving some much needed repairs. It is still doing well considering it was built in 1871 and still is an active aid to the U.S. Coast Guard for navigation. 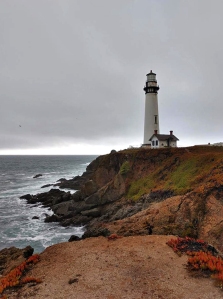 Way back when, five families took turns in shifts to tend to the lighthouse which was functioning 24 hours a day. Very close to the lighthouse, individual rooms still stand today but have now become a youth hostel for travelers. I was thinking that it would be awesome to stay there but I am not sure about sharing the kitchen and potty with a bunch of strangers. It is hotels for me; leave the hostels for the young adventuresome spirits.

The lighthouse is listed as a historic park and can be viewed by the public for free, although at one time, tours were given.

There is also a gift shop and historic info on the grounds.

It was a nice place to stroll around while viewing the now water drenched coastline from the perspective of the bluffs.

The view from Pigeon Point

We continued southbound on Highway 1 and stopped as mentioned in Davenport, then it was on to Santa Cruz.

Santa Cruz:
Santa Cruz is a larger town of just over 62,000 people and a popular destination point for visitors of every age. It is especially loved by the younger crowd in part because of its huge seaside amusement park!

The Santa Cruz Boardwalk began in 1907 and is one of few carnival style venues that are situated directly on the beach, just steps from the sand.

The boardwalk and a thrill ride in the background. Just feet from the sand.

The covered boardwalk was perfect as it protected us from the cascading raindrops of a now steady downpour. We gratefully stayed dry as we wandered through the numerous shops and game arcades. As with any amusement park, there were plenty of places to eat, sweets of every type, and plenty of carnival games.

A large carousal welcomed riders of any size or age to throw a ring into a clowns face to try and win a prize while nearby you can face off in a game of fast paced laser tag.

There were also roller coasters, and other thrill rides, and an outdoor ice skating rink.

The rain stopped for a brief moment so we slipped away to go down to the waters edge. It was a wide beach in every direction, and we all had the same question, “I wonder what it looks like in summer! I am sure it gets pretty crowded but there is plenty of sand and plenty of space.

Pelts of water started hitting our head so it was time to get back to the safety of the covered walk-way.

This is an awesome place to visit and even if you don’t like amusement parks, Santa Cruz is a pretty exceptional place with plenty of other things to do.

Not too far from the amusement park stands the 2,745 foot long Santa Cruz Wharf. This pier allows you to drive and park right on top of it, allowing you easy access to all the cute shops and restaurants.

There are at least ten different places to eat and a handful of gift stores along the route. It was shopping haven for one of us while I preferred the view of the seashore. As the sun was slowly setting, a pale shade of pink splashed  across the fluffy clouds. The rain was long gone and it was a perfect evening to…have some clam chowder!!!!

Woodies Café provided just that as our window seat gave us a birds-eye view of the surfers who were vying for their last ride of the evening. To the north of the pier, Steamer Lane surf break is known for some of the best waves in California. As visibility was fading fast, we were amazed that there were still a few wet suited surfers still out in the water.

Santa Cruz also has an active downtown with bars and restaurants that I know from visiting before, but this time we were content on staying by the coast and enjoying all it has to offer.

You can view sea lions lounging on ledges at openings in the pier and as we were leaving for the day, we heard the distinct bark of a few in the distance. We had sea food in the belly (Yuk, not mine), salt air in our lungs, sea lions serenading our departure, and a rapidly clearing sky… It was a good day.

Tomorrow in part three, we head south slowly making our way home. First we stop in Monterey and then stay overnight in Santa Maria. On the way home on the fourth day, we sea glass hunt in Ventura, and shop in Camarillo. Stay tuned.

Here is part three of this story.: